OTTAWA – Canadians overwhelmingly support subjecting Big Tech platforms like Facebook, Netflix and others to Canadian laws and values. This was the conclusion of a recent Nanos Research survey commissioned by citizens' group, FRIENDS of Canadian Broadcasting.

87% of Canadians support (70%) or somewhat support (17%) the idea that American companies like Google, Facebook and Netflix should be subject to Canadian laws and paying Canadian taxes. Moreover, 58% of Canadians strongly agree and 20% somewhat agree that foreign companies like Netflix broadcasting into Canada via the Internet should be subject to the same rules and contribution obligations as Canadian broadcasters.

“Canadians understand that it is fair and reasonable to require trillion-dollar American media companies like YouTube, Facebook and Netflix to contribute to Canadian culture, which also benefits the broader economy,” said FRIENDS Executive Director Daniel Bernhard. “That means, for example, that Netflix should be required to invest in Canadian content AND pay taxes on the income it makes from Canadian subscribers, just like everybody else,” he added.

Canadians also believe that more should be done to tackle harmful content circulating on digital platforms. Of note, only 11% of Canadians think that social media makes democracy stronger (4%) or somewhat stronger (7%). Moreover, and of particular importance when considering misinformation that has circulated during the pandemic, a strong majority of Canadians (81%) say content displayed on social media platforms is less accurate than content published in traditional media.

“While the idea of regulating American tech giants like Facebook, Google and Netflix may be controversial among some Ottawa insiders, Canadians overwhelmingly support reasonable, necessary regulations,” added Mr. Bernhard. "Ottawa would be wise to stop listening to American corporate lobbyists and take this clear message from Canadians to heart."

For more information or to book an interview:
Sarah Andrews
[email protected]
613.808.7255 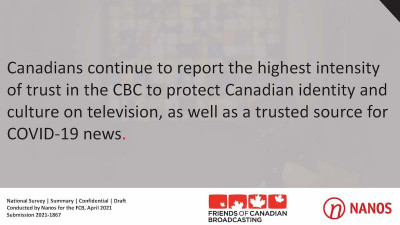 Stand with us in the defense of Canada's cultural and economic interests.
Join our movement
Up Next
Broadcasting a Reflection
Briefing