1) FRIENDS of Canadian Broadcasting (FRIENDS) is pleased to provide these reply comments in respect of the Commission’s proceeding on the policy framework for commercial radio. Based on the record of the proceeding, FRIENDS is satisfied that (1) permitting greater common ownership in local radio would be an appropriate means by which the CRTC can provide regulatory relief for commercial radio, so long as the quid quo pro is increased investment in local news and information for Canadians, (2) slightly greater flexibility for commercial radio in Canadian content obligations, and a reorientation towards support of emerg-ing and Indigenous artists, is appropriate, and (3) looking to online providers to contribute to the funding of news and information and provide greater support for Canadian music and art-ists must become an immediate priority.

2) The Broadcasting Act requires private programming undertakings to “contribute significantly to the creation and presentation of Canadian programming” and “be responsive to the evolving demands of the public” “to an extent consistent with the financial and other resources available to them”.

3) In our intervention, we observed that CRTC financial statistics show a larger radio group revenue decline of 27% from 2019 to 2020 and that “there is every indication that digital platforms did not suffer as much through COVID-19 as traditional media, so the assumption that things will bounce back for radio is perhaps not a wise one.”1 Based on these CRTC statis-tics, industry polling and sales tracking, the Canadian Association of Broadcasters (CAB) es-timates reductions in revenues of 27.3% from 2019 to 2020, total pre-pandemic declines of 16.5% from 2013 and February 2020, and 22% revenue declines post-pandemic (to end 2021).2 The CAB argues that revenues will not return to pre-pandemic levels, and that by 2029 they will be down 28.5% from 2019 levels.3 Given the steady transfer over the past fif-teen years of revenue from traditional media that produce valued content to online platforms that are highly profitable and often produce none,4 and the Commission’s own 2018 projec-tions,5 the CAB’s projections do not appear to be an unreasonable.

4) Private radio’s less-than-rosy financial picture has consequences for Canada. There may be little the Commission can do that would positively affect private radio revenues, but the deci-sions it makes in this proceeding could have a significant effect on private radio’s viability. Further, commercial radio is not in a position to absorb increased overall regulatory obliga-tions, but decreased obligations would also be harmful. We must strike an appropriate bal-ance. Finally, private radio’s ongoing support for the public policy objectives commercial radio itself advances (local news, Canadian music) must be complemented by contributions from other players in the system, whom the CRTC continues to exempt without merit.

6) The ongoing relevance of commercial radio, echoed in the CRTC’s and CAB’s research, is also evidenced by the calls from intervenors for private radio to do more, including providing greater support for emerging, Indigenous and black artists.

7) These are genuinely important objectives. But for the Commission to enact additional obligations for commercial radio, while continuing to leave online competitors unregulated, would be nonsensical.

10) The Commission was created as an independent body precisely because Parliament should not be micromanaging the regulation of Canada’s broadcasting and communications systems. In practice, this means that Parliament’s inaction, which is beyond disappointing, is no barrier to the Commission doing what it must, all of which is permissible under existing law. While a nice, even useful formality, Bill C-10 is not needed to provide the Commission with any “cover” to do its job. FRIENDS would like nothing more than to witness the CRTC offer proof of life for its notional independence. The best time to do that was yesterday. The next best option is to act today.

11) In its intervention, the CAB argues that “while still ensuring radio remains the most diversely owned and operated local medium in Canada, [greater station ownership at the local market level] would help radio operators to recover from severe revenue declines, and navigate future anticipated declines, while ensuring programming diversity and enhancing their ability to offer locally-relevant news and information.” The CAB also points to CRTC data to the effect that, prior to the pandemic, revenue declines had been managed by trimming non-programming expenditures but that, post the pandemic, programming expenditures were suffering.7

12) The CAB’s proposal for a new common ownership policy is that “band restrictions” (specific AM & FM station limits) be eliminated and the limit for markets with eight or fewer stations be raised to four radio stations; for markets with nine to 16 stations, the limit be six stations, or a maximum of half the stations in the market, whichever is lower; and for markets with 16 stations or more, the limit be eight. Bell Media argues that the current common ownership policy “should be eliminated in its entirety,” whereas some smaller broadcasters recommend a limit of three stations in smaller markets.

13) In effect, the private radio industry’s argument for changes to the Commission’s common ownership policy (COP) is that revenue reductions demand cost reductions, and through greater local ownership, those cost reductions can be directed to administrative or non-programming functions, rather than local programming.

14) While this argument may be mathematically sound, it also carries great risk for the public interest. While the CAB argues that broadcasters have demonstrated through the pandemic their desire to do as much local programming local news as possible, elsewhere in its sub-mission, the CAB states that “in-depth local news and information programming is essentially no longer viable on radio without support.”8

15) Thus, the potential for greater local consolidation to result in reductions in local programming including local news cannot be dismissed. Instead of eight stations in Toronto being operated by two or more operators, with distinct and separate editorial operations, the CAB’s proposal would allow one news operation to feed all stations, with a net loss in local voices and choices. Moreover, without safeguards as proposed by the Ontario Association of Broadcasters (OAB), competitive balance between operators in smaller markets may be upset, resulting in a loss of local programming diversity.

16) FRIENDS does not object to increased common ownership in all cases, and accepts that as radio increasingly competes with large international conglomerates online, allowing a degree of increased local ownership could result in greater viability and ability to support local pro-gramming, provided certain regulations are in place. In order to ensure that the local programming benefits of increased common ownership are realized, FRIENDS submits that:
1. In the event of acquisitions or station exchanges among larger radio groups, minimum commitments to local news be established; and
2. Caution be exercised in smaller markets to ensure that any consolidation results in a net benefit.

17) FRIENDS does not profess to have the expertise necessary to propose precise measures in regard to the above, but has no reason to disagree with the views expressed by OAB and smaller broadcasters such as Starboard Communications in respect of the latter issue. We certainly disagree fundamentally with Bell Media’s view that all ownership rules should be abolished, as while being in Bell Media’s interests, this would clearly not be in the public interest.

18) In respect of FRIENDS’ proposed quid quo pro for larger broadcasters to support local news, we believe this to be an appropriate way of ensuring that operational savings from modestly increased common ownership do, in fact, get reinvested in local programming, particularly news. We could envisage this being established as a tangible benefit that groups would offer in seeking approval of ownership transactions that take advantage of higher common ownership thresholds.

21) Music Canada, the Canadian Independent Music Association et al (CIMA et al), and the CAB make similar comments on the increasingly international nature of the music industry, and the need to update MAPL as a result:

22) FRIENDS agrees that, while remaining a solid foundation for the future, that MAPL can be modernized without being diluted. This would both recognize the increasingly international nature of music production and distribution, and provide slightly greater flexibility to Canadian broadcasters in meeting their Canadian content obligations without reducing the prevalence and diversity of Canadian creativity on radio. Some of the additional points advocated by CIMA et al may also be addressable through new credits or incentives.

23) In contrast to MAPL, there is little agreement between broadcasters and other intervenors on Cancon levels and how best to support emerging and diverse artists. While the CAB calls for reductions in Canadian content requirements from 35% to 25% and endorses credits to support emerging and diverse artists, Music Canada, CIMA et al, the Black Music Business Collective and Indigenous Music Alliance call for the maintenance of Cancon levels at 35% and ask that specific sub-quotas be introduced for emerging, indigenous and other diverse artists.

24) In support for its position, the CAB has tabled evidence to the effect that “At 35% or more for popular music, Canadian content levels are more than three times reasonable measures of normal “market” level”.9 On the other hand, CIMA et al tabled evidence to the effect that streaming of Black Canadian artists (and songs) is far greater on most streaming services than radio playlists.10

25) FRIENDS has seen no evidence that current Cancon quotas are harming Canadian private radio stations. In fact, we note that over the last two decades many stations voluntarily offered 40% Cancon levels for popular music. The CAB has adduced no evidence to the effect that Canadians are abandoning Canadian radio in favour of streaming services because of high Cancon quotas as opposed to other factors, like personalization and easy access from native apps on mobile devices. Barring such evidence, FRIENDS urges caution, alt-hough a nominal reduction, say returning to the 30% as Cancon level in effect before 1999, may be appropriate in some specific cases. 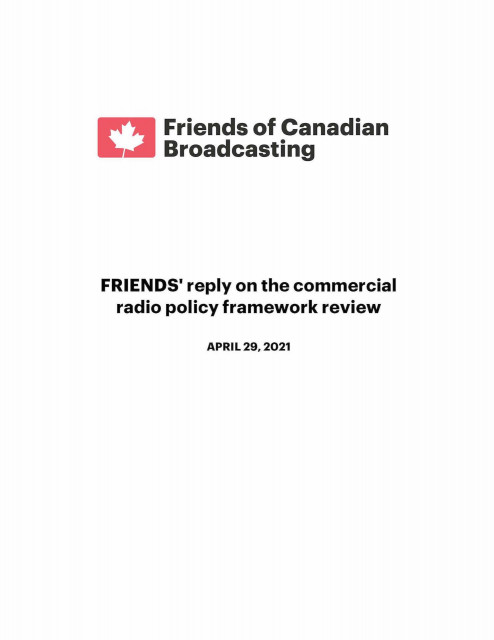 Stand with us in the defense of Canada's cultural and economic interests.
Join our movement
Up Next
FRIENDS' intervention in CRTC 2021 Commercial Radio Review
Policy Briefs