The release of a communique from the Group of Seven (G7) in early June 2021 put the taxation of foreign digital commerce on the front page in Canada. But beyond these lofty, abstract plans lie stark fiscal truths. The government of Canada spent roughly $122 billion in 2020-2021 in labour market supports to help an entire nation get through its darkest hour during the COVID-19 crisis.1 Meanwhile, Amazon blew past projections to report a 224% increase in profits after earning revenues of $108.5 billion globally in the first 90 days of the year,2 despite failing to protect their workers from COVID, which ran wild at many Amazon facilities in Canada until public health authorities stepped in to shut them down.3 Likewise, Facebook’s stock more than doubled between March 2020 and March 2021, all while the platform exacerbated the pandemic by being “the greatest source of COVID-19 disinformation”.4

With each passing day, foreign corporations of such enormous scale are extracting immense wealth from the Canadian economy and contributing almost nothing in return. Often, they inflict significant social, economic, and democratic damage in the process. Yet because they operate online, they operate tax-free. That needs to change.

Canada’s existing policy of allowing foreign companies doing business online to pay no corporate income tax is wrong in so many ways. At root, it is simply unjust: a slap in the face to every Canadian citizen and corporation that pays its fair share of taxes to sustain the services upon which each of us depends. It is fiscally irresponsible, robbing the treasury of billions in tax revenue: a self-inflicted fiscal wound left untreated for decades, now further aggravated in this time of crisis, when government intervention is critical to supporting Canada’s economy. It is also profoundly anti-growth and undermines competition; by granting preferential treatment to foreign firms, Canada’s tax policy hinders the development of Canadian companies, putting them at a significant and enduring disadvantage to their foreign competitors.

Worst of all, this policy reflects a tragic lack of national self esteem; a strong and confidently sovereign country would never permit itself to be swindled by these companies and their armies of tax avoidance consultants.

While we recognize that tax policy can be complex when companies invest so heavily in tax avoidance, the central principle animating Canadian tax policy should be quite simple: every business operating in Canada digital or otherwise should pay the same rate of corporate income tax on their Canadian profits.

If we judge the Digital Services Tax (DST) proposed in Budget 20201 by the above principle, its fiscal and ethical shortcomings shine through.

First and foremost, the proposed rate of 3% is a fraction of the approximately 25% average blended corporate income tax rate in Canada. We recognize that the DST applies to revenue rather than profit, but for businesses such as Facebook and Google that have barely any Canadian employees or infrastructure, their profit margins for Canadian operations are likely close to 100%. A 2016 article reported that Facebook’s Canadian head office had just 75 employees.5 By contrast, Facebook made an estimated $2.6 billion in Canada in 2018.6 Even if the average compensation for these employees is $200,000, that’s just $15 million or 0.5% of revenue.

We further recognize that taxing revenue instead of profit defends against transfer pricing schemes and other aggressive avoidance measures. But we must also recognize that a flat tax on revenue disincentivizes investment in Canadian plant and labour, expenses that would normally reduce income tax payable. If Canada’s goal is to foster economic growth at home, a tax on profit that rewards domestic investment is far more effective than a tax on revenue that does not. If the reason for taxing revenue is to mitigate the risk of aggressive transfer pricing schem es, our recommendations, below, contain ideas about how that risk could be mitigated.

In ethical terms, the DST converts a sin of omission to a sin of commission, as non enforcement gives way to legally entrenched favourable treatment that is fundamentally anti competitive, which is to say anti Canada. This is a most worrisome principle to establish in law. It amounts to a permanent, built-in disadvantage for Canadian companies operating in the digital economy, penalizing them simply for being Canadian. It is also a tax subsidy worth billions of dollars per year from the Government of Canada to companies like Amazon and Facebook, who have profited immensely throughout the COVID 19 pandemic often by exacerbating it and whose business models have inflicte d profound harms upon Canada’s economy, democracy and society. Tax policy is hardly the best instrument for punishing the likes of Facebook for the harmful effects of their businesses, but their odious behaviour highlights the absurdity of affording them a nything less than equal treatment compared to their Canadian competitors.

FRIENDS takes a particular interest in this subject because it just so happens that the largest digital businesses operating in Canada are media companies like Google, Facebook, Net flix, and increasingly Amazon, Apple, and Disney. Preferential tax treatment is one of several reasons why these companies have been able to corner the digital advertising market, decimating legitimate Canadian media whose operations have historically been funded by advertising for the most part. It’s easy to undercut your competitors when they pay taxes and you don’t. Serial non application of Section 19 of the Income Tax Act is but one example of a regulatory omission that favours foreign tech giants at t he expense of Canadian media. The law stipulates that Canadian businesses which advertise to a Canadian audience cannot deduct those expenses for income tax purposes. Yet this law has not been applied to foreign digital advertising, creating a loophole wor th an estimated $1.82 billion in foregone tax revenue in 2019 alone.7 This is effectively a government subsidy to Google and Facebook, allowing them to charge artificially low prices at the direct expense of legitimate Canadian media. The effect of this uneven playing field has been the loss of nearly 20,000 Canadian journalism jobs since 2006, according to News Media Canada and J Source. The private television workforce has been reduced by half since 2014.8 Undermining the competitiveness of Canadian com panies through poorly crafted and seldom enforced tax laws has devastating impacts. Advertising revenues that were once converted into democracy enriching news coverage and local content are now supporting companies whose main contribution to society is po larization, hatred, and scams and propaganda, thanks in small part to Canada’s inexplicable policy of allowing Facebook and Google to operate outside of our tax system. While the 3% DST as proposed would be an improvement on the shameful status quo, it has the effect of legitimizing and solidifying preferential treatment for these companies who merit no such thing.

FRIENDS was also very concerned that Budget 2021 proposed to exempt media streaming services from the DST. We see no reason why such a carve out is justified, especially considering the enormous revenue impacts of this exemption. We suspect that this decision was made in light of sales taxes being applied to these streaming services. The government seems to be saying that business to business services will pay the DST because sales taxes are effectively nil after deductions, while business to consumer services must collect and remit sales taxes but are spared the DST in exchange. From the perspective of the streaming services and their lobbyists, this arrangement feels like a fair compromise. But Canadian citizens and Canadian companies competing in these markets understand that this is at best a tragic capitulation. At worst, it is an unspeakable betrayal of Canada’s national interest.

You are no doubt aware that Canadian business to consumer services must collect and remit sales taxes and pay corporate income taxes. Why should their foreign counterparts be treated any differently? As above, this proposal would convert a sin of omission into a sin of commission, entrenching preferential treatment for foreign digital services into law. A confidently sovereign state would never abide such a submissive, unjust, and unduly expensive tax policy. Canadians deserve a more fair, sovereign approach: the type of policy befitting a confidently sovereign country. 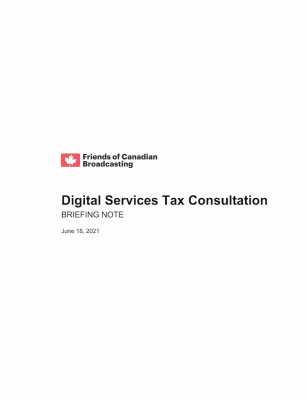 Friends of Canadian Broadcasting (FRIENDS) is a citizens’ movement championing Canadian culture and democracy, on air and online. We receive no funding from any government or corporation and are not affiliated with or directed by any broadcaster or media company.

Stand with us in the defense of Canada's cultural and economic interests.
Join our movement
Up Next
Canadians support making big tech play by our rules and contribute to Canadian storytelling
Press Releases