To download the full Yale Report, and for links to other commentaries and reactions, please go to the bottom of this page.

The Broadcasting and Telecommunications Legislative Review panel has issued its sweeping report: the first in nearly 30 years to comprehensively examine Canada’s communications system.

With Canada’s print and broadcast media facing extinction at the hands of unregulated digital competitors like YouTube, Facebook, and Netflix, FRIENDS had high expectations. And the panel, led by former Telus executive Janet Yale, did not disappoint.

The report’s title says it all: Canada’s communications future: it’s time to act. Yale and her esteemed colleagues accurately captured the crisis wracking Canadian media, and they called on the government to act urgently to preserve Canadian voices in print, on air, and online.

But with 97 recommendations spanning 235 pages, it can be tough for non-specialists to grasp the full weight of what this seminal report is proposing. So I thought it would be helpful to distill the report’s findings into six simple principles. But first, some context.

Why do we need this report?

Canadian media, both private and public, are in free fall. We’ve lost more than 16,000 journalists since 2016. More than 250 media outlets have closed. Just last year, there were layoffs and restructurings at CBC, CTV, Torstar, The Globe and Mail, La Presse, and Groupe Capitales Médias, to name just a few.

There are many reasons for this downturn, but the main culprit is the flight of advertising revenue away from traditional media in favour of online platforms like Google and Facebook. When it comes to entertainment, we must also factor in the flight of subscription revenues. Canadian streaming services like Crave are competing with foreign giants like Netflix, Amazon, Apple, and Disney who pocket sales taxes, pay no income taxes, and have no obligation to finance Canadian content.

The heart of the problem are the laws and policies that perpetuate this disadvantage. Netflix doesn’t sidestep sales taxes because it is a criminal enterprise. They do it because the government allows them to.

Ultimately, it comes down to a question of sovereignty: will Canada govern the Canadian digital economy according to our democratically-determined laws and rules, or will we continue to allow foreign digital behemoths like Google and Facebook to impose their rules, morals, and standards on us?

6 key themes from the Yale Report

The report emphasised the need for a strong, independent CBC. Because if we want our stories to be told and our news to be reported, somebody has to do it. Even with measures to staunch the bleeding in the news industry and to require foreign streaming giants to finance Canadian content, the media outlets that closed down won’t magically return. So if the market can’t sustain that activity, public service media must step in.

The report makes a number of welcome recommendations with respect to the CBC, including that:

These are crucial recommendations, that FRIENDS has championed for years. I’m thrilled that the panel came down so clearly in support of a strong CBC as part of a vibrant media ecosystem.

2. Canada is in charge of Canada

The Yale report comes down clearly on the side of Canadian sovereignty. In the panel’s own words:

"[Our vision ] reaffirms Canada’s sovereignty, supports our democratic values and inclusivity, and aims to realize the promise of advanced technologies for the benefit of Canada’s economy and future prosperity, and Canadians as citizens, users, and creators."

All media players should be governed equally – online and offline, foreign and domestic. If Canadian broadcasters have to contribute Canadian programming, foreign streamers should contribute the same amount – no more, no less. If Canadian news organizations pay journalists for content, foreign aggregators and sharing platforms should have to pay them too – no more, no less. The same applies to the transmission of illegal content: if it’s illegal for CTV to broadcast the Christchurch massacre, it should be illegal for Facebook to do it.

If it happens in Canada, Canada should decide how it is governed. We’re in charge of what happens here.

The crisis of Canadian media isn’t a natural disaster: it’s largely man-made. Why is it that Facebook, Google, Netflix, Amazon, and Apple earn tens of billions of dollars in Canada every year but don’t pay corporate income taxes or charge sales taxes or contribute to the financing of Canadian content in the same way their Canadian competitors must?

Because the Canadian government has neglected to require them to.

The panel is clear that this free ride must end:

In this day and age, with more and more economic activity going digital, it makes no sense that the largest players in the media game have the fewest obligations. The government’s continuation of this lunacy is more than just unfair. It reinforces the idea that Canada has no business taxing foreign companies that earn billions here. That idea is dangerous and wrong and the panel has been clear that it must be expunged from our laws and our attitudes.

4. There is a news crisis in Canada and it must be addressed urgently

There can be no democracy without news. For proof, look no further than demagogues like Donald Trump and Boris Johnson, who vilify the media because they know that their biggest political vulnerability is the truth getting out.

If news is a precondition for democracy, we should be very concerned. The Canadian news industry is in deep trouble. More than a third of our journalists have been laid off. Over 250 media outlets have closed. Many more are on the brink of bankruptcy, including major national players like Postmedia and Torstar. Even the CBC has been closing local stations, and local CTV and Global outlets are running on skeleton crews.

The problem isn’t that Canadians don’t want news, but rather that the people making all the money on news are not the people who produce it. Canada’s #1 source of news is Facebook, which doesn’t employ a single journalist, doesn’t pay news organizations for their content, and makes billions on paid and organic content that is demonstrably false according to its own fact checkers.

The Yale panel has therefore recommended that:

The report was very clear that requiring foreign tech giants to invest in Canadian news and entertainment isn’t just about money: it’s about Canadian culture. The report uses the term “cultural sovereignty” 15 times.

We’re our own country with our own stories, morals, history, politics, and society. Audiences in other place aren’t grappling with reconciliation, for example, as we are. Same-sex marriage, cannabis, medically-assisted death, even public health care: these are normal in Canada, though still controversial elsewhere, especially in the United States. If we get our entertainment from a country where half the people think it’s OK to take a gun to a kindergarten, we’re going to have problems. Because when it comes to media, you are what you eat.

Yale was clear: Canadian content matters. If we don’t tell our own stories, nobody else will. Hence, the suite of recommendations about financing Canadian content with government funding as well as expenditure requirements for foreign internet broadcasters and a strong CBC.

The problems the panel tried to address aren’t new: they have been wreaking havoc on Canada’s news and creative systems for years. And the damage is only accumulating. It is not enough to implement the recommendations eventually. With every passing day, we lose more journalists and media outlets. The situation is urgent. Time is not our side.

If you agree that Canada has the right to regulate our own media sector, and that the government must act now, please encourage them to do so. Add your name to our petition.

They’ll never know we care if we don’t tell them.

Yale Report: The sky is NOT falling down, by Daniel Bernhard. February 4, 2020. Friends.ca. 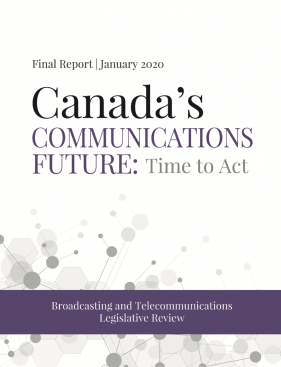 Tell the government to act NOW for our culture and democracy!

Tell the government to act NOW for our culture and democracy!
Up Next
Yale Report: The sky is NOT falling down
Editorial