I fell into podcasting as a bit of a happy accident in 2016, when I was working in the video department at a newspaper (I know, platforms are weird, the future is now!).

One thing I love about podcasting is that the format keeps me hopeful in this totally fraught, gong-show era of news media.

Whereas social media and algorithms do so much to keep driving wedges between people, podcasting is an antidote to polarization, where active listening is the act and the prize and the whole reason for being. Podcasts like Finding Cleo, Ear Hustle and Drilled methodically take on some very crusty, systemic concepts of colonization, race, incarceration and climate change denial. Can you imagine conversations approximating that level of depth or nuance happening on social media? Can you imagine trolls not taking them down?

When it comes to my own experience, the “happy accident” that landed me in podcasting was Colour Code, a podcast about race in Canada by the Globe and Mail. In 2016, a team of colleagues and I created it because frankly, it seemed Canada was overdue for some real talk.

So we went for it. And then I got scared.

I know what’s at stake when women talk about difficult topics in the media. Bad things can happen.

What was I doing, talking about race? I’m not an expert, I worried. I don’t know what missteps I might make. And the Voldemort, don’t-speak-its-name fear was trolling or, worse, doxxing. I know what’s at stake when women talk about difficult topics in the media. Bad things can happen on 4chan and Reddit and right out in the open on Twitter.

When we hit “publish,” I braced myself for something bad to happen. But nothing really did. I only speak for myself here, but the feedback loop mostly consisted of positive emails and Twitter comments. I did get some critical feedback on social media, but it was from scholars who had deep thoughts. While it’s a panicky feeling to be publicly called out on the topic of race, it was exactly the kind of talk we wanted to foster – constructive, not abusive.

I was surprised, and relieved. And on the other side of it, I came to a conclusion: people don’t troll podcasts.

I don’t have any empirical data, just my own experience. But I’ll tell you what I see: Trolls will blast you with hate mail if you write a newspaper column, if you do the weather on a local news show and your dress isn’t to their taste, if you dare be a TV news anchor in a hijab, if you do your job as the federal minister of the Environment. 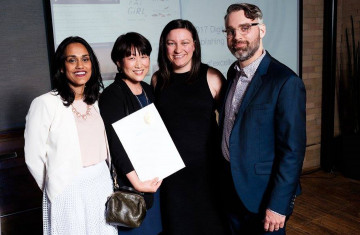 But it seemed like you could raise thorny questions that fly in the face of our sanitized, fictional self-image as a benevolent land, superior to the racism we see so clearly in the U.S. And it would be OK — as long as you do it in a podcast.

I thought about all the reasons why this might be.

First of all, people self-select as listeners. I was afraid the haters would opt in, too. But who has the time to hate-listen to 11 episodes at over 30 minutes each? Imagine a troll that diligent. I mean, in that amount of time, you might have some second thoughts on life.

Second, the mode is audio. The human voice is Kryptonite for trolling. There’s so much humanity wrapped up in a voice, in the tone, cadence and spirit. Trolling is abuse rooted in dehumanization. It can’t foment when you hear someone talk and actually take breaths, maybe even laugh, speed up with excitement or just generally be an actual human being, not just an avatar for partisan abuse.

Trolling is abuse rooted in dehumanization. It can’t foment when you hear someone talk and actually take breaths, maybe even laugh.

Third, it’s about connection. “A podcast, at its core, is just two people talking to each other” is what an American public radio executive said when he kindly took time to meet up before we started making Colour Code. The simplicity was comforting. For months, in production, it helped me stay calm. “We’re just recording conversations, that’s it.”

And to have a conversation, a good one, you need to actively listen.

Recently, my friends at Word Bomb, a podcast about words and what they say about our culture, published an episode exploring the word “white.” (Full disclosure: I used to executive produce this show). I reconnected with Pippa Johnstone, one of the hosts.

Wasn’t she nervous to tackle the word “white?”

“Yeah, I think we were really hesitant,” she acknowledged. “It’s a word that’s like a lightning rod this year.” However, she said that it was probably her favourite episode of the entire season to produce.

“It’s less scary to talk about whiteness if you’re white. I experience white privilege and I can talk about it without it sounding accusatory, and I think it’s important to have white people do that work,” she said.

Want to help us fight for Canadian culture and public broadcasting? Here's what you can do:

“Sounding accusatory” – I’m just going to repeat Pippa’s words here. Words on paper can go pretty far, but actual human voices? There are a million shades of meaning that can be conveyed in ways that text on screens can’t do.

She reminded me that I’d told her, way back in the beginning, that people don’t listen to a show for a half hour just to troll you. I guess I said it as a booster for courage. But it’s the thing I still cling to, too.

As we all learned from that incredible This American Life episode with Lindy West, when she confronted her own troll, if there’s any way to connect in this era of super-confusing, fragmented communication and trolling, it might be to go as analog as possible and just use our voices. Talk. Listen. Pretty simple.

Podcasting just gives us a way to do it.

Stand with us in the defense of Canada's cultural and economic interests.
Join our movement
Up Next
Here's why I wanted to speak out on Canadaland
Editorial