Last week, FRIENDS delivered a whole lot of love for the CBC, along with some frank criticism that can only come from the closest of friends.

Almost 7,000 of CBC’s most fervent fans messaged the CRTC as part of the Commission’s review of CBC’s licences. The response was record-breaking!

Here are just a few of the comments from messages that flooded the CRTC from across the country:

“The CBC is an essential public service, a cultural treasure, and must be both properly funded and protected from those interests which want to destroy public broadcasting.”

“As a taxpayer, I feel ample support for CBC it is an excellent and important expenditure of public funds with the priceless return of informed and connected citizens.”

FRIENDS also delivered some straight talk, taking CBC management to task for some of the things it wants to do during its next licence period, and calling on the CRTC to reject these plans.

For example, the CBC is proposing to broadcast less Canadian content during prime time, less local news and less children’s programming on its TV and radio services. The reason? CBC management wants to spend more on its digital platforms.

CBC should be going digital but not at the expense of its TV and radio services.

That’s like robbing Peter to pay Paul and FRIENDS supporters don’t like it one bit. We surveyed 2700 FRIENDS supporters and 89% think CBC management’s proposal is a bad or very bad idea. Just 4% think these proposals are a good or very good idea. You can read the full survey report here.

CBC management is proposing other controversial measures. For example:

You can read FRIENDS complete submission to the CRTC here.

The CRTC will be convening a public hearing starting May 25th to discuss all of the issues and proposal that are on the table as part of the CBC licence renewal process. FRIENDS will be there to make sure your voice is heard! 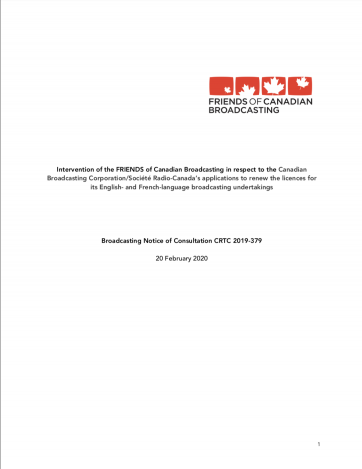 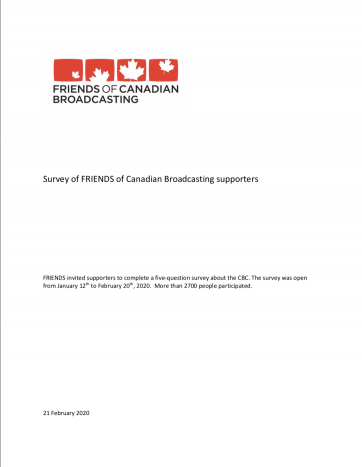 Stand with us in the defense of Canada's cultural and economic interests.
Join our movement
Up Next
It's 2020. Why do we need community radio stations?
Editorial