FRIENDS is alarmed to learn of the cozy relationship between one of Heritage Minister Steven Guilbeault's most senior officials, Thomas Owen Ripley, and Kevin Chan, Facebook’s most senior Canadian lobbyist. A recently released document revealed, among other things, how Mr. Ripley offered to help Facebook’s lobbying arm poach executives from the Public Service. This revelation is especially critical as it comes precisely as the Department of Canadian Heritage was drafting legislation that would have major impacts for Facebook.

Below is the letter we sent to Minister Guilbeault's office urging him to state publicly that Mr. Ripley's actions are not acceptable, and that the minister make public any meetings between Mr. Chan, Department staff, and anyone in his office.

Recently-released documents reveal a cozy relationship between one of your most senior officials, Thomas Owen Ripley, and Kevin Chan, Facebook’s most senior Canadian lobbyist.

Mr. Ripley volunteered to help Facebook’s lobbying arm poach executives from the Public Service at precisely the time that his office was drafting legislation that would have major impacts for Facebook. Incredibly, Mr. Ripley saw no problem with Facebook’s suggestion that these staffers return to public office after a short stint at Facebook, so that they could resume regulating the company that had just paid them handsomely.

Furthermore, the documents suggest Mr. Ripley and Mr. Chan subsequently met to discuss the Yale Report, which was released less than two weeks prior to the communications in question. As a key official responsible for implementing the Yale Report, I worry that Mr. Ripley’s chummy, undisclosed relationship with Mr. Chan may have compromised any advice he gave you on how best to regulate them.

As the country awaits long-promised amendments to the Broadcasting Act that could have a significant impact on Facebook, the appearance of a cozy, undisclosed relationship between Facebook and senior officials in your department could undermine public confidence. This would be most unfortunate, since you have spoken commendably of the need to regulate companies like Facebook, so they pay taxes, pay content creators fairly, and are held legally liable when they publish and broadcast illegal content.

Since this is now a matter of public record, I urge you to state in public that Mr. Ripley’s behaviour is unacceptable and will not be tolerated. I further urge you to make public any meetings between Mr. Chan, Department staff, and anyone in your office. To clear the air further, it would help to quickly introduce legislation that ends special treatment for Facebook and their ilk, by ensuring they comply with Canadian law, pay Canadian taxes, and submit to Canadian regulatory requirements, just like any other company.

As always, please contact me for more information or if you think I can be of assistance. 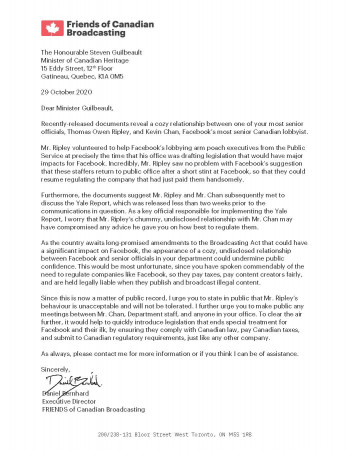 Downloadpdf | 58 KB
In this article →
Join our movement

Stand with us in the defense of Canada's cultural and economic interests.
Join our movement
Up Next
Bernhard available to comment on Speech from the Throne
Press Releases